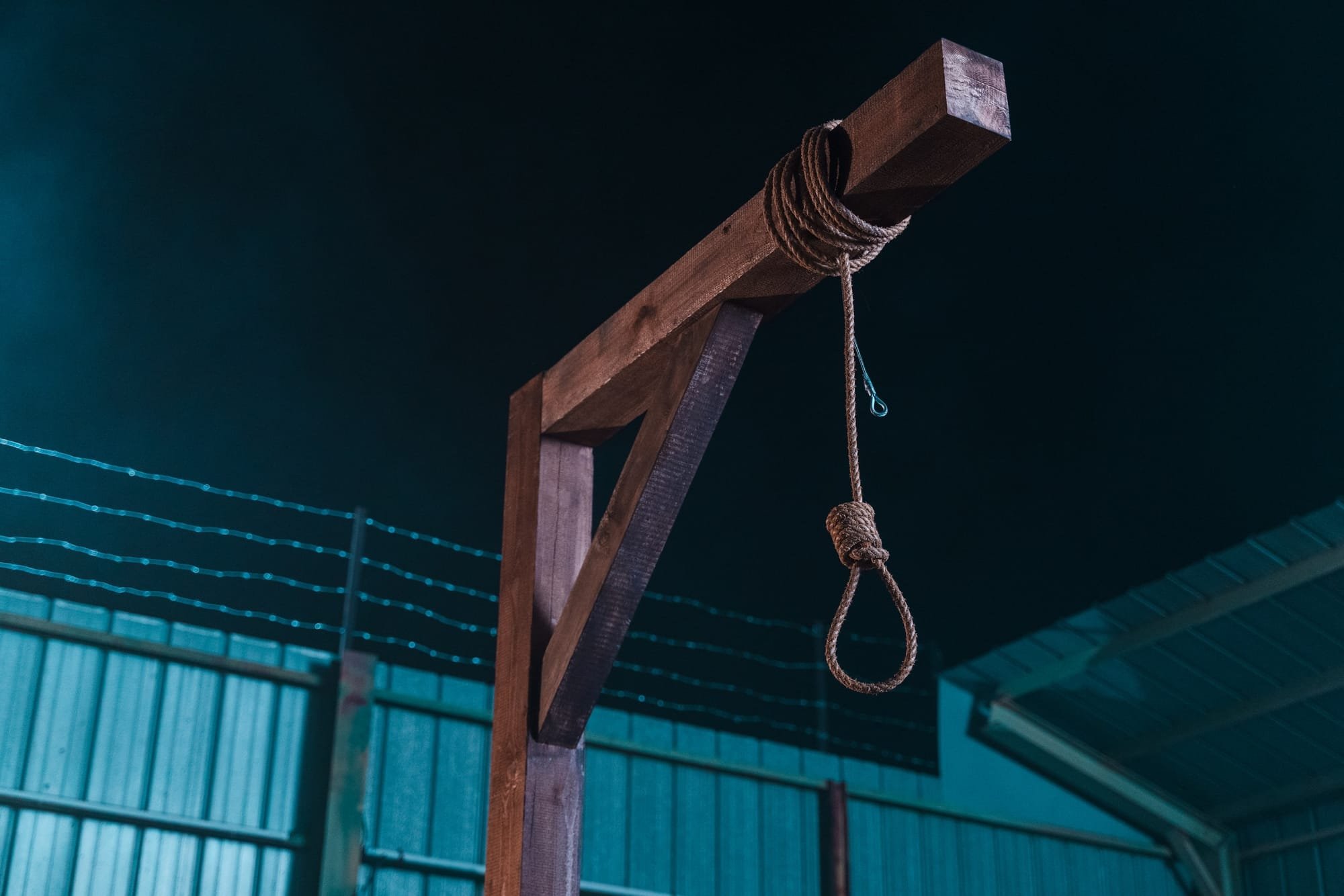 This story was first published in Revista Echinox on 9 August 2021.

The flickering light in this cell does not annoy me, not even in the slightest. Neither does the sense of impending doom, nor do the distant cries of the condemned. The scratches left on the filthy walls haunt my eyes wherever they roam. But I seem immune to such misery, for in such hard existence I feel most delighted. And only in opposition to all that is deemed joyful can I truly know who I am.

“I don’t need a priest or a charlatan. I have nothing to say to them,” I told the prison guard through the iron bars. “Just get me a pen and some papers. The black ink shall be my final witness.”

“You’re going to hell for such blasphemy.” He disappeared, came back after a minute or so, and threw a small notebook and a pencil at me. “Here you go. We’ll see you at dawn.”

Now that no other soul can distract me, I shall pen down my story. Morals I shall give you none, for I have always been above such crude judgments. What I can offer you is the horrific narrative of a life that thrived on needless antagonism.

From my early years, doubt and spite festered in my heart. Everywhere I looked I saw only conspiracies and suffering. Even when my eyes fell upon a pleasant natural scene, I could only think of the mortifying decomposition processes that underlay such sublimity.

Humanity seemed depraved and brutish, and in the most extraordinary acts of kindness, I could only see selfishness masquerading as sacrifice. Thus, my dislike of my fellowmen gradually snowballed into full-blown hatred that even those closest to me often had to endure.

My brokenhearted grandmother told me shortly after my father passed away, “He’s in a better place now.” She wept for a while before collecting herself. “His soul is watching over you.” The words barely came out of her.

“What do you mean ‘he is in a better place,’ Grandma? We buried him together in a pit in the ground! I’m fourteen. I understand how death works.”

“I know you don’t believe in the afterlife, but trust me—”

“It has nothing to do with what one believes. His body is already decaying. His brain as well, so any trace of who he was is gone. Get this through your head, the sooner the better!”

Her tears overcame her again. And, for reasons beyond me, the sight of the wrinkles the years had etched into her pale, white face made me furious.

“Also, what do you mean by his soul is ‘watching over me’?” I derided her.

“So, is he going to see me when I take a bath or relieve myself? Wouldn’t that be more torture for him than simply not existing? Why would you want him to sit on a cloud in the sky and watch over our misery? What joy is there in seeing us doing the most mundane of things time and time again until nature takes its course, and we become nothing like him?”

I looked her in the eyes and saw the reflection of her broken soul in that dark brown color.

She shook her fist at me. “You’re heartless. Let me believe whatever I want to believe. Isn’t it enough that I had to bury my only son?” she blurted, struggled to get up, and left the room.

My mother rushed in. Her hazel eyes were blazing with anger. “What’s wrong with you? Why do you have to be that spiteful? Why would you hurt your grandmother? Why?”

“Why are you shouting at me? What did I do? I just told her the truth. She shouldn’t be mad at me. She should be mad at this world and the human condition. I can’t tame my tongue and let her believe in superstitions, just so she’ll be happy. We’re all prisoners to biology and destined to decay. Why should we also be prisoners to superstitions and magical thinking?”

“What have I raised? You must be the most hateful soul in this kingdom. Your spite is going to be your end,” she said with a tone saturated with disappointment and disdain.

Years dragged on, and, after the death of my mother and grandmother, my iconoclastic nature left me no companion but my spite. My life, sustained by the riches I had inherited, was mostly homebound apart from the occasional trip to the town square to buy the necessities. My only entertainment was my frequent consumption of copious amounts of opioids to drift into a world of hallucinations where “escape” was the most recurring theme.

“Escape gravity. Leave your meat suit behind,” I would imagine the come-hither stars ordering me. “You belong here, high up in the air.”

“Come fly with us. Be free,” I would envision the clouds inviting me.

A sense of soul-shattering disappointment conquered my being every time I came to. “For how long? For how long am I going to tolerate this miserable existence? I just want to escape. Maybe my grandmother was right. Maybe there’s something beyond this bleak physical realm. But how would I know? How would anyone know unless he’s already dead?” I used to cry.

On a cold night in late December, I went to the town square to buy some wine to warm my lonely soul. The cobblestones wore a mixture of mud and snowmelt. Fog callously filled up the whole scene and made everything look somehow blurry. The careless passersby stepped in the murky water puddles and spread the dirt around, defiling whatever white patches of snow had survived.

“I blasphemed against the king. I am forever scornful and worthy of shame,” a man suddenly shouted in a brittle voice.

I turned around and saw two Royal Guards pushing around a blindfolded young man with his hands tied behind his back. Every time he stopped, the guards hit him with the buttstocks of their long rifles and called him the obscenest of names. They kept on doing so until they reached the center of the square.

“Get on your knees and confess.” One of the guards viciously kicked the haggard, emaciated man in the back of the knee.

The man collapsed. “I blasphemed against the king. I am forever scornful and worthy of shame.”

“Louder!” the guard ordered him. “Louder!”

“I-I-I blasphemed against the kin—”

“Not loud enough.” He hit him on the back of the head.

“I blasphemed against the king. I am forever scornful and worthy of shame!” the man screamed in terror.

It did not take long for the unthinking masses to assemble and join in, exacerbating the agony of the poor soul.

“He should be killed for what he’s done,” a man said, then bent over, gathered some muddy snow, packed it into a ball, and threw it at the man he considered a heretic.

“No one curses the king,” an intoxicated woman shouted, drank her bottle empty, and hurled it at him. The bottle shattered against his head, cracking it open. Within seconds, his blindfold was soaked.

“Speak again, you animal,” someone else screamed.

The guard hit the prisoner again.

“I blasphemed against the king. I am forever scornful and worthy of shame,” the man said in a lifeless monotone, as though he were declaring that he had turned into an empty shell and lost every shred of human dignity.

The charade went on until the man dropped unconscious.

As the mob began disbanding, an elderly woman approached me and said, “What a wretched man, right?”

“No man should offend the king.”

I just stared into her blue eyes; they seemed like bottomless abysses.

“What? Don’t you agree?” Her eyes protruded at me, adding more dread to her worn, unkind face.

“My son works for the Royal Guards. He told me today that from now on those who insult the king will be summarily hanged within a day; they will be high up in the air unless pardoned personally by His Majesty.”

I nodded at her.

“Our king is God’s representative on Earth. Those who insult him insult the Almighty Himself!”

I shook my head again, bade her farewell, and retreated to the safety of my home.

There, I ingested whatever pills I had left from the opioids and went into a trance-like dream. And again, I dreamed of the distant stars, the clouds, and all else that adorned the night skies inviting me to be “up in the air” and to forsake my “meat suit.” They asked me to squeeze my soul out of my weary body and let it soar with them.

When I woke up the next morning, I found myself possessed by the blue-eyed hag’s words: “Those who insult the King will be summarily hanged within a day; they will be high up in the air.” Her voice rang over and over in my head until the idea of insulting him reigned over my entire being.

As the night approached, I dragged myself to the town square. It was bustling with His Majesty’s subjects—uncomprehending, unthinking slaves.

I stood in the middle of the square and shouted, “F—k the king. F—k him a thousand times. F—k him and his entire inbred family.”

“Your king is an illusion. You worship what you think he is, a demigod walking among us. But in reality, he’s nothing but a man, a flawed, diseased, immoral one at that. You mindless and frightened souls, how could you believe that an inbred freak is God’s representative on Earth? I was one of you, but now I’m awake. I’m totally awake. I know better now; I know that I belong to the boundless skies.”

The mob grew thicker and more agitated. And some of them began cursing and throwing objects at me.

“Let’s lynch the apostate!” someone shouted.

As the offended masses closed in for the kill, two Royal Guards arrived.

“Order! Order!” one of them yelled. “No need to lynch him now. The apostate will be arrested and executed at dawn. You shall feast your eyes on the just punishment. Disband now!”

The crowd mindlessly complied as the guards tied up my hands and led me to this cell.

I can now sense the dawn approaching. I am ecstatic and giddy that soon I will be up in the air—that my lifeless, relieved corpse will dangle and swing back and forth, setting me free and apart from the vacuous and witless. My only fear is that the king may pardon me before then.